Day 1 of our Siem Reap adventure began with a huuuuge breakfast at La Tradition D’Angkor. The carbo overload alone should have been the clue regarding the vicious tour ahead of us. But a full tummy does not help one’s brain to think clearly.  So we were completely oblivious to the “Extra Challenge”-esque day waiting for us inside the south gate.

The hotel officer, Mr. Dara Long, kindly prepared an itinerary for us and arranged for a tuktuk driver, Mr. Bun Theon, to bring us to the temples.

It was my first time to ride a tuktuk (was not able to do this in Bangkok). I love how fresh the air is. No smoke belching vehicles and tobacco-smoking idiots. Breathing fresh air is something I miss because I live in Manila. Oh well. 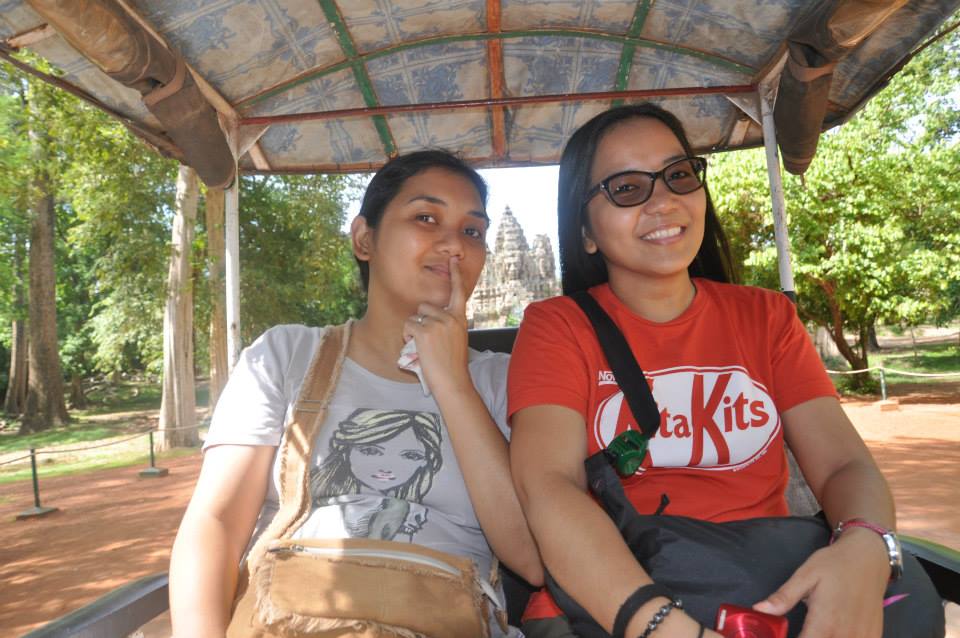 We started our temple tour at Angkor Thom — literally “Great City”. It was founded by King Jayavarman VII in the 12th century and was the capital until the 17th century.

Tourists normally enter through the south gate. The tower at the gate features four faces pointing at each of the cardinal directions. As to whose faces these are, archaeologists cannot be sure. It could be the face of Jayavarman VII himself, or a bodhhisattva. The bridge leading to the tower is lined with massive stone statues which seem to be carrying a giant snake (aka naga. A female naga is called a nagi…or nagini ^_~ Got the Harry Potter clue?). These seem to be a reference to the Churning of the Sea of Milk, a popular myth in Angkor. Why are they churning milk? For sure, they are not making a sea of ice cream (but one can dream, right?).

As is obvious from some of the pictures below, parts of the temple city are being renovated, hence the scaffolding and tarpaulins. Also, some of the heads of the statues are new. Many years ago, people pillaged the temples and sold the statues to unscrupulous buyers, and many of the heads ended up outside Cambodia. 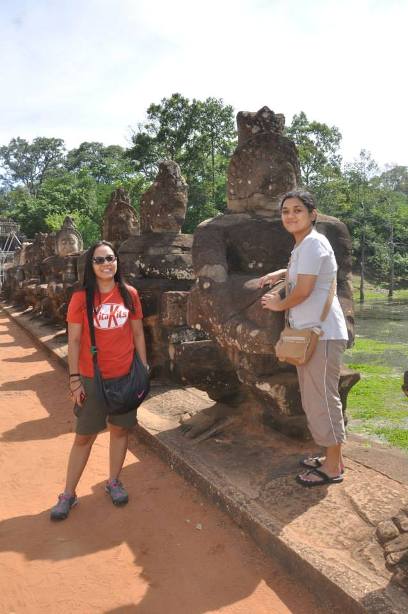 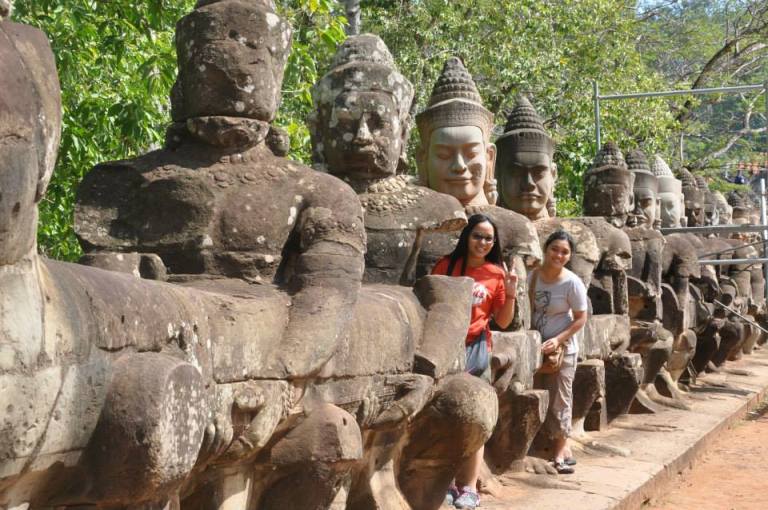 Our first stop was the Bayon Temple, the magnificent state temple of Jayavarman II. It is unique in all of Angkor because of its towers with many faces. Thirty seven towers still remain, from the original 49, and most of these towers have four faces pointing to the 4 cardinal directions. 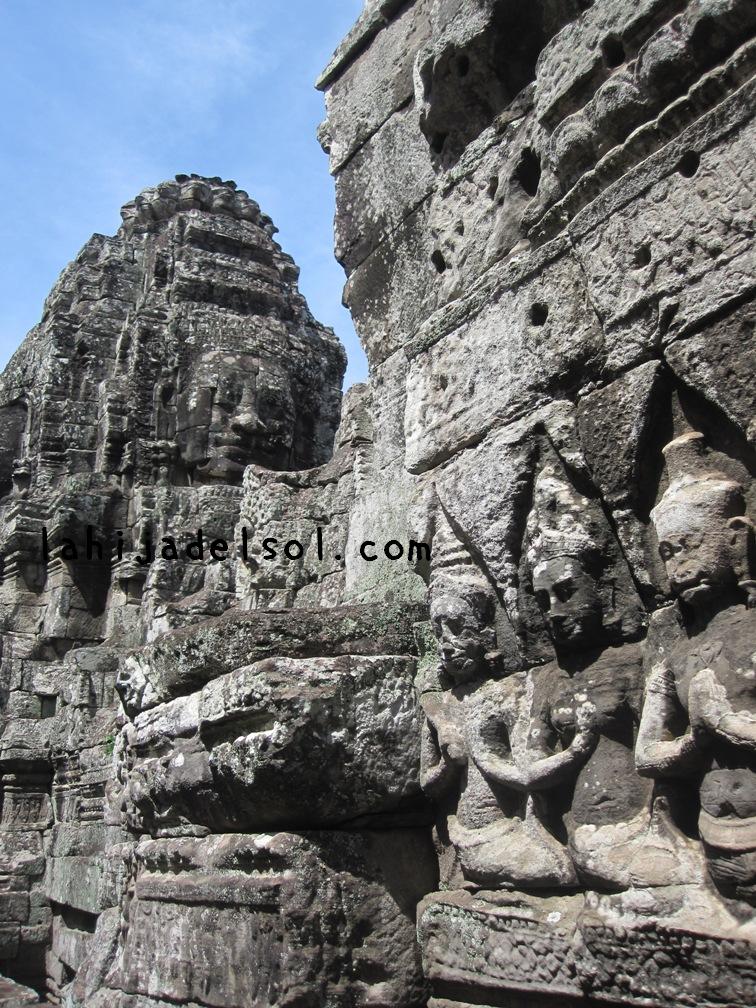 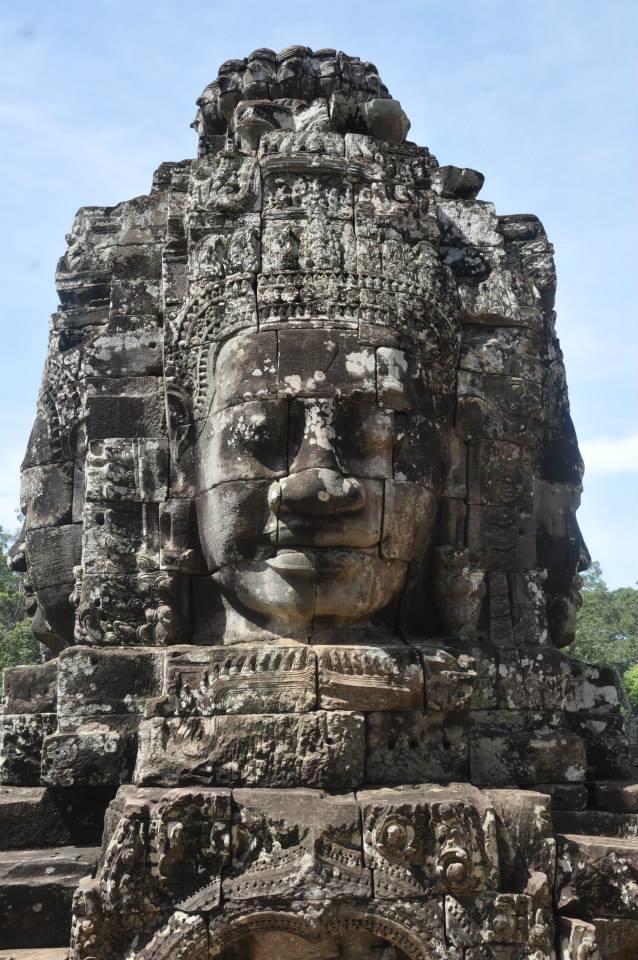 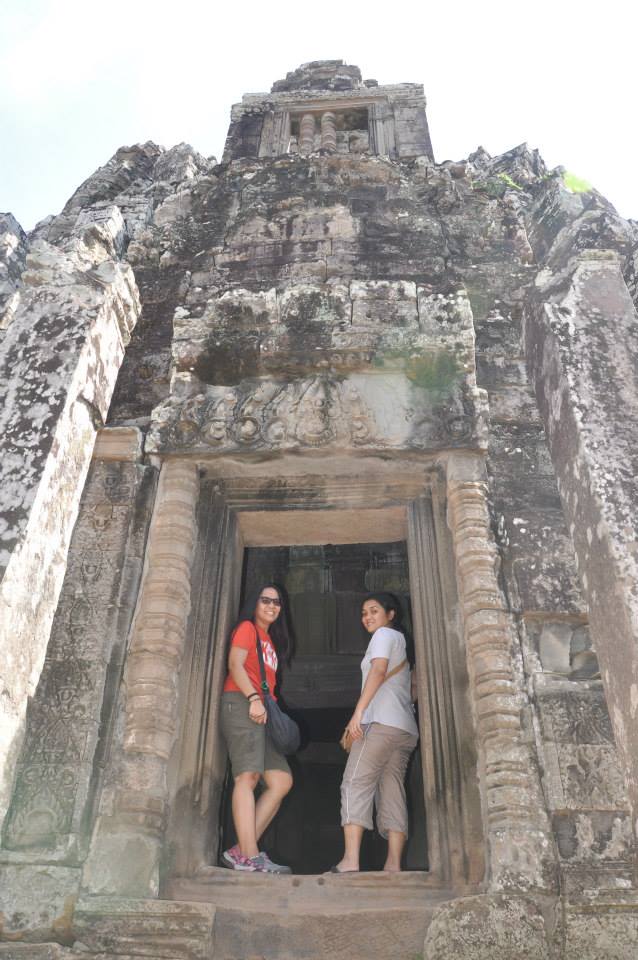 Aya, Renan and I were in complete agreement: with the exception of Angkor Wat, Bayon Temple is our favourite among all the sites we visited, owing to the unique beauty from the carved faces on the towers. None of the other temples had these. And if you look closely, each of the 4 faces in a tower had a different expression. Of course, none of the faces had the same expression as Renan’s below. But still, unique ^_^ 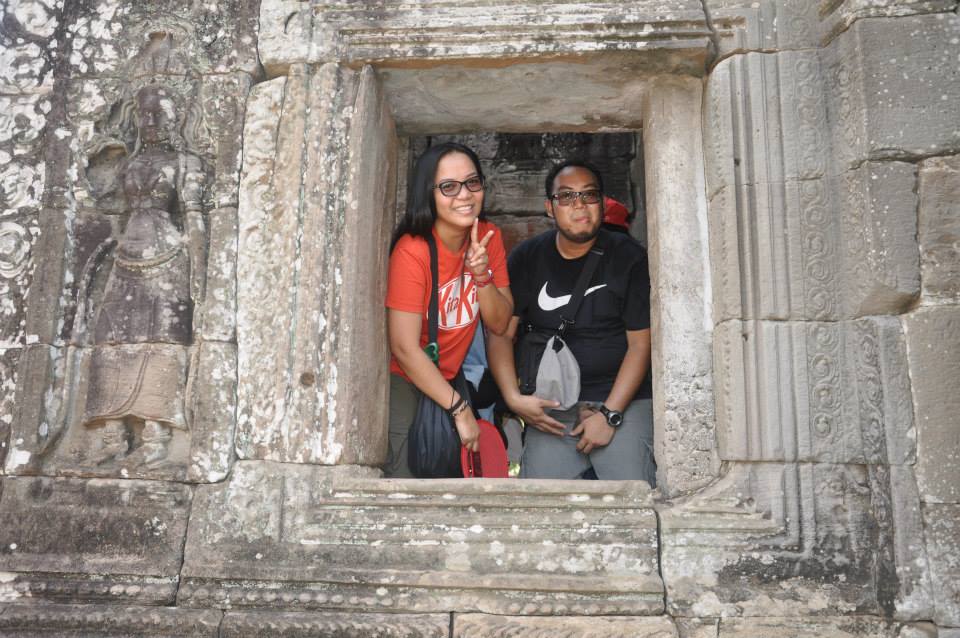 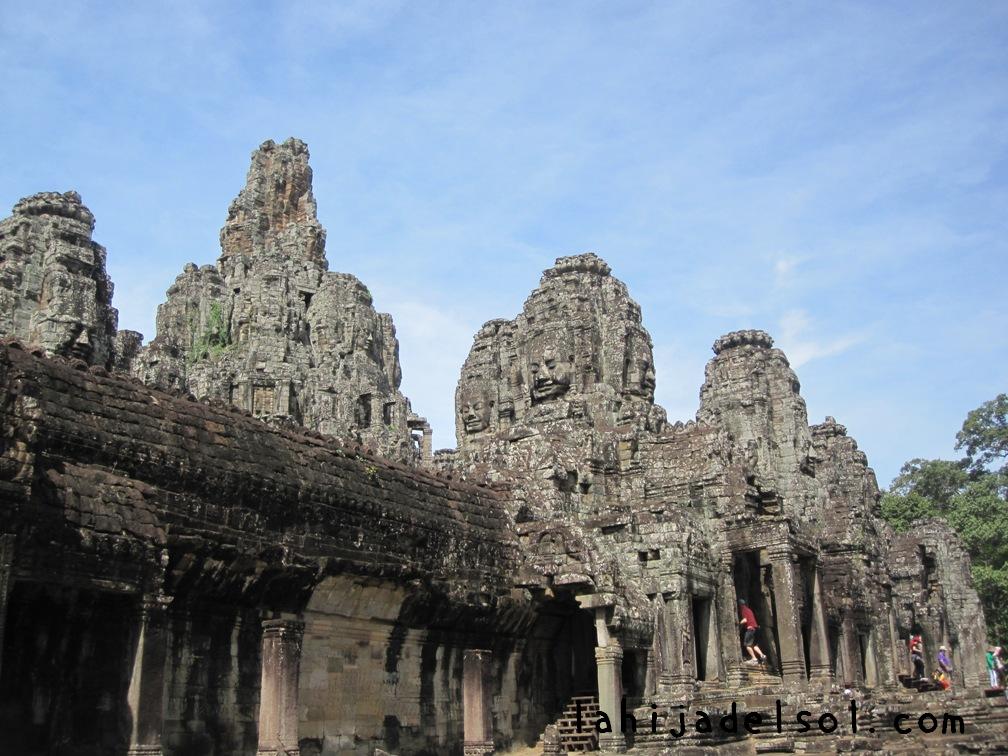 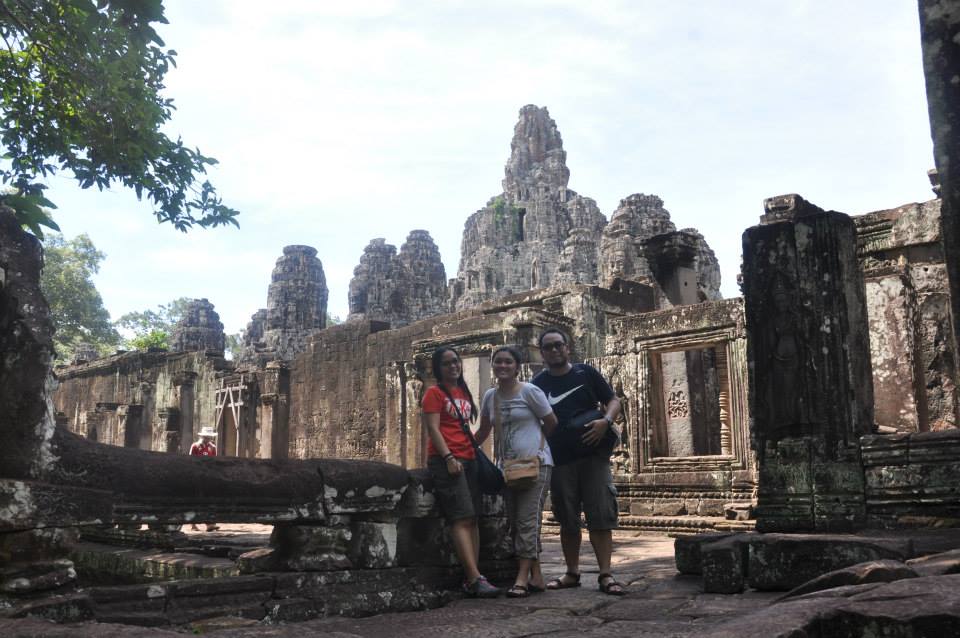 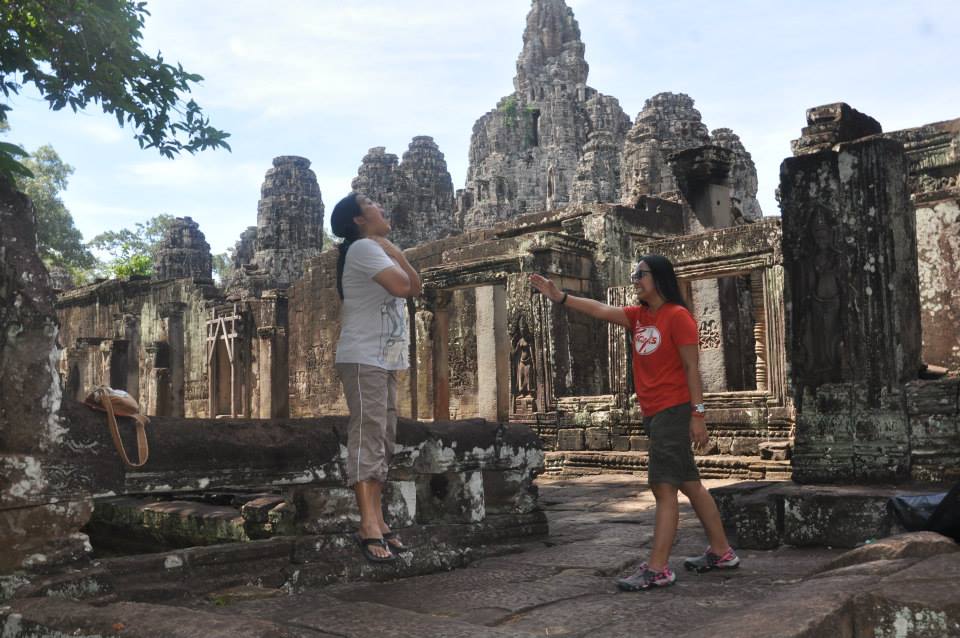 I am the big sister. Therefore, I am the bully. 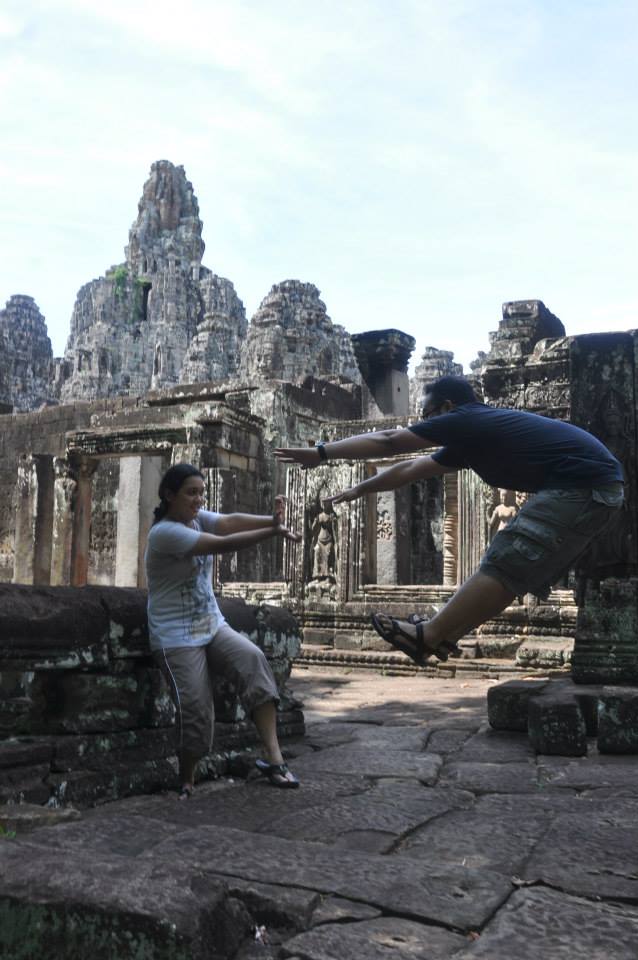 Powerful! Don’t worry, this is just how she shows her love for her boyfriend. It’s normal.