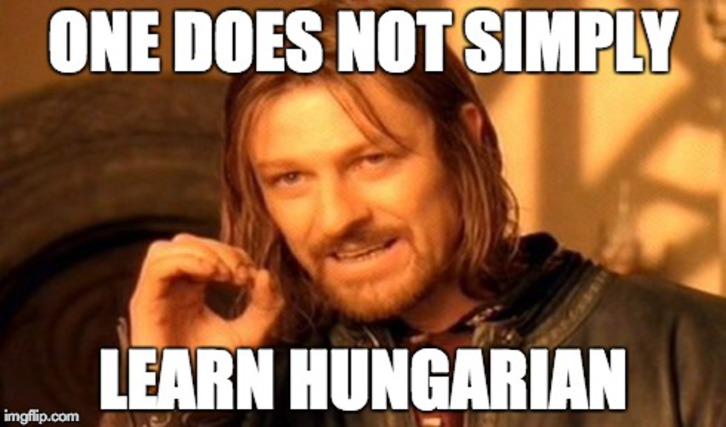 Or, the original title:

On days that I badly needed some extra sleep minutes, I would begin to think that this whole JLPT N1 thing was a bad idea…just 3 weeks in and I am starting to dread my flashcards. I have got 18 decks for my Sou Matome set so far, and I can never finish watering all of them. It can get frustrating to see blue “Items for watering” when I have just finished “watering” or “planting” a deck.

I guess this is similar to what has happened to me in the last 2 years. I have fallen out of love with the language, and the only thread that connects me to it is Fukuyama Masaharu — whom I cannot quit, of course!

But it is to early to quit the language mission — and this is too important for me to give up. I have my secret and not-so-secret goals and reasons why I have to do this. For example, world domination. And I mentioned some opportunities that have opened up because I can speak Japanese.

So  yes, no matter how hard, I must trudge on. It is always hard at first. I am sure it will get easier to stay on track once I get rid of all the negative feelings. I think I must binge-watch Galileo! Or should I get Fukuyama’s latest concert DVD? ….

This week, I did not have any italki lessons. I had to reschedule all my sessions with Robert and Zita because of work. I hate rescheduling because I know that my teachers prepare for these lessons. They just don’t appear on Skype teaching effortlessly. They tailor the sessions to my needs. But on some days, it can’t be helped. In fact, I am planning to write a post about rescheduling sessions on italki — just because I’ve done it quite a number of times already! 😛

I have finally finished the Absolute Beginner section of HungarianPod101. Yaaay! I started on Lower Beginner this week, and Csaba has replaced Gergő as the host. You know, you have to listen to Csaba. He’s got a really nice voice 😉 But don’t worry, Gergő is still around as he is doing the voice of Balázs (Balázs, the Hungarian name above all Hungarian names). The nice thing about the HungarianPod101 hosts is that they actually read your questions and comments about the lessons. I’ve actually had a couple of responses from Csaba himself 😀

Notice anything different on my tracker? I  made this using Excel 2013. I love the gradient color on the bars. Office 2013 has a bit of a learning curve but it looks really nice, don’t you think? 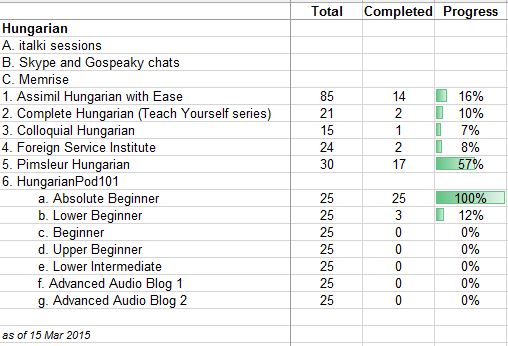 Look at my new tracking spreadsheet! Notice that I have also put in the number of minutes I spend on each task. I was pleased to see that despite what I initially thought, I am actually spending an average of 1 hour each day for Japanese. Hungarian needs a bit more time but I am getting there and I am really pleased. Progress, baby, progress!
HungarianPod101.com – Start Mastering Hungarian Today

See? The excuse that you do not have enough time to learn a new language really does not hold water. These tasks were spread out in a day. I have never done them in one sitting. When I am waiting in line at the bank, I take out my iPhone and go through my Memrise cards. Do you want a longer study time? Do all your banking errands with BDO — the waiting time takes forever, so you can study forever too. Another bonus: they do not have enough seats for banking customers so more often than not, you will have to stand while waiting. I read somewhere that standing while studying is actually better for you. Yay, BDO! Pfft.

While commuting, I listen to a podcast. I don’t live far from my workplace. But as Metro Manila traffic is bad even in C5, I can listen to a 15-minute podcast at least 3 times! After lunch, I spend about 10-15 minutes doing something else. Ten minutes here, five minutes there. They all add up. So log off Facebook and just do it 😉