This is a long overdue update on my Hungarian lessons. Update? What update? 🙂 For weeks, I put Hungarian (and Japanese) on the back burner while I concentrated on French. I must admit that I am struggling a bit with the language because:

1) it is so different from the languages I know. The vocabulary and the grammar structure are very, very different from English, Filipino, Japanese, French and German.
2) I find the pronunciation difficult and a bit confusing. Like, [sz] is pronounced with the regular [s] sound, while [z] sounds like [zh] (as in the word pleasure). Go figure. Although, I have to say, I love listening to anything Hungarian, even if I cannot understand a word. I love how it sounds — so elegant.
3) I get intimidated with all the fancy “decorations” on top of vowels. I initially thought I could wing it and paid less attention to what is a back vowel, what is a front rounded vowel and what is a front unrounded vowel. This is my first time to learn about vowel harmony.

But of course, Hungarian is too important for me to give up. I realized that what I do need is a proper battle plan, just like what I did with my French spreadsheet. Putting my progress on an Excel sheet helps me to easily keep track of where I am on what resource/book. Besides, I am a geek so I use Excel all the time 😉

And speaking of resources, I lament the fact that there aren’t many great Hungarian books and programs, unlike popular languages like French and Spanish. I really need to reevaluate my materials. I did a bit of reading – OK, a ton of reading – today on good materials for Hungarian and came across Richard Simcott’s Pimsleur Hungarian

30-day challenge. He did the first unit of Pimsleur (I think units 1-5 out of 30 units) and made a video after the 30th day. I must say I was very impressed. I downloaded the unit 1 trial lesson and the only things I learned from it was “excuse me, do you speak English?” and “No, I don’t speak English”. The 30-minute lesson was basically just this! I was a bit surprised. I mean, come on…

But I did like the emphasis on proper pronunciation — which is definitely what I needed! They broke down long words into syllables and the learner is made to pronounce each syllable starting from the end. I like it and I think I did show a bit of improvement in saying “nem beszélek magyarul” 🙂 Another good point: now I know the difference between “Magyar” and “Magyarul”. 😀

Also, I am thinking of looking into Teach Yourself Hungarian

. I have a Teach Yourself book for French grammar

and I like it so far. Also, hyperpolyglot Moses McCormick swears by the Teach Yourself books and method so I thought of giving it a try.

Again, I’ve said it before and I will say it again…Why can’t Michel Thomas create a program for Hungarian? I am a huge fan of the Michel Thomas method because of how it gets me to learn in a natural way. No memorizing, just building up on prior knowledge and adding elements bit by bit.

I will, of course, still use Colloquial Hungarian

and Assimil Hungarian with Ease

. I will just have to put everything in a nice, logical battle plan. In the meantime, I am working on practicing pronunciation of individual letters and some basic greetings. I made a Brainscape deck of some of the most common greetings and put in audio files I got from Forvo. I can’t believe I only just signed up for a Forvo account! This site is so freaking useful for pronunciation. I love it so much that I might even buy the app from iTunes.

Anyway, my Hungarian flashcard decks look sorely lacking right now, but I intend to make full use of Brainscape with Forvo to create custom decks that are actually useful for me. 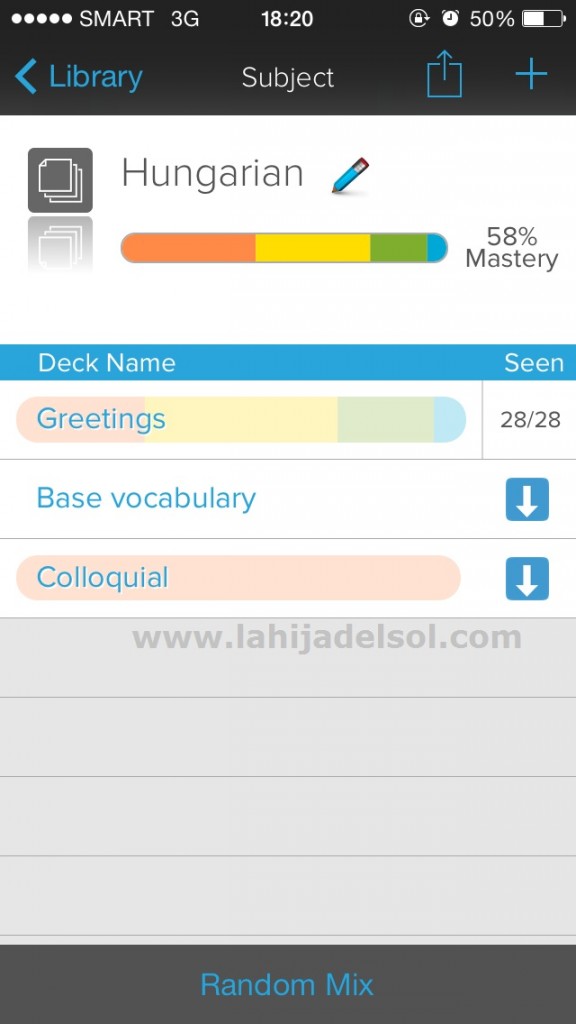 This is a sample of a card from my “Greetings” deck. I put in the English expression as the question and I have to answer in Hungarian. After I answer, I touch the number corresponding to my “confidence” of my answer — I this case, I hit number 2 which means “Slightly”. The audio will automatically play after I touch a number. The colored bar at the top represents my confidence progress of all 28 flashcards in this deck. As you can see, I only have a few blue cards, meaning I don’t know a lot 😀 But I will get there soon 😉

To end this post, this is a video of Richard Simcott speaking in the 16 languages he knows…

Once he started speaking in Italian, I had to fight back tears. So freaking brilliant. Deym, one day, I will make a video like this. 🙂