My first italki-Skype chat with a Hungarian language partner 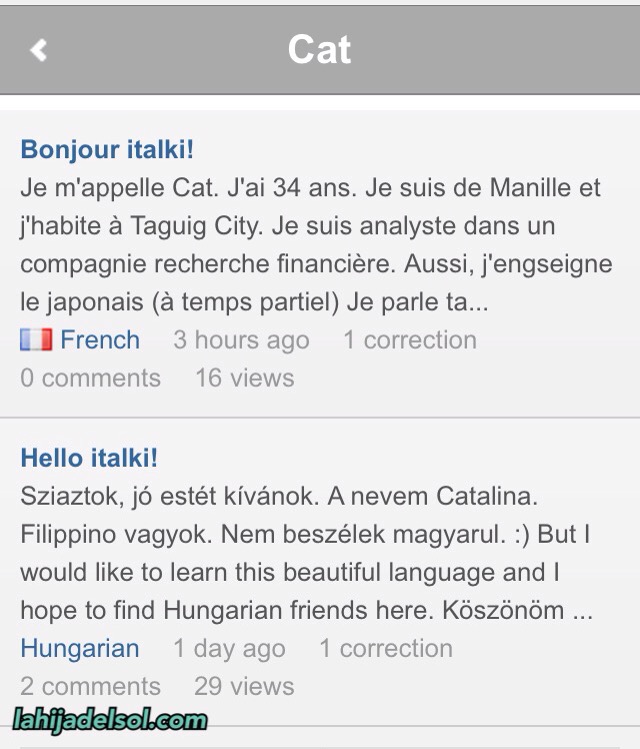 Last month, I signed up with italki because all my favourite polygots were talking about it. But I got overwhelmed by the sheer number of people in the site so I logged out and forgot about it.

But this month, I was re-evaluating my language goals and thought I needed some more structure that can be provided by a teacher who is a native speaker. I do not have the time to go to a school and there are no Hungarian schools here anyway. So I went back online to check out some people to teach me or to do language chats with me.

I updated my profile, added a photo and started following people with similar goals. I looked for people who can help me with French or Hungarian and would like help with English, Tagalog or Japanese.

I also wrote short intro posts in my italki Notebook and had help from native speakers with my mistakes. It was awesome. It’s like Japanese all over again.

When I was still studying for the JLPT, I signed up with Gaijinpot to find Japanese chat partners who can help me with my study. It was a fantastic resource and I had regular MSN chats with various people: housewives, company employees, university students…I even had a friend who is a bus driver in Tokyo. I helped him with Tagalog conversation and pronunciation…I remember he was such a strict grammar teacher! We met up when he came to the Philippines for a diving vacation. At that time, I was working for the government and he called me “お嬢さん” as a term of respect. Ack, if he only knew.

For Japanese writing practice, I signed up with www.lang-8.com. No Tagalog learners there but I was able to help a number of people with their English. One of them is a Filipino-Japanese girl who needed help for her university level grammar. She didn’t know any Tagalog as she grew up in Japan.

It was a nice experience. You get to practice languages while helping someone with theirs. You also learn about new cultures and make new friends. When you learn a new culture, it helps you appreciate your own. This, I really believe.

The Hungarian guy, Peter, asked to add me on Skype and I was surprised that he started chatting right away. It was great because he seemed enthusiastic about the fact that I wanted to learn Hungarian. He wrote in both English and Hungarian and I really picked up a lot in last night’s conversation. He even gave a lot of insights about Hungary — one of my questions for him was “What makes you proud to be Hungarian?“. He sent me an interesting infographic that I wish to use in a future post — it was definitely an eyeopener for me. As for my question, maybe it was too serious to ask on the first chat. But I realized he is already very good in English and can express himself in more complex sentences, so I decided for a more “mature” and thought-provoking topic. And because I am so not good in Hungarian, I can only answer questions like….”Szereted az almát?” (Do you like apples?). I cannot even answer things like “What did you do today”? I gotta step up big time! But hey, thanks to him, I know how to say “én egy gazdasági elemző vagyok.”

He doesn’t know much about the Philippines but that is not so surprising. He is studying English and Dutch and he is a rapper. He said “én egy repper vagyok“. Rapper…I know, right? He sent me a link to a Youtube video of one of his songs.

With music, I prefer rock and electronic dance music, maybe a bit of pop (but not much). I wasn’t much into rap, even when they were all the rage before. But Hungarian is probably the only language that can make rap music sound elegant. Pleasing to the ears. Here is Peter’s song. Have a listen:

Cool, huh? He has a great voice that is very smooth. If you put it on loop, the song grows on you. I don’t understand the lyrics…but that needs to happen next year.

In the meantime, I will keep on “italking”…how about you? 🙂