Finding the stoke in Bagasbas Beach 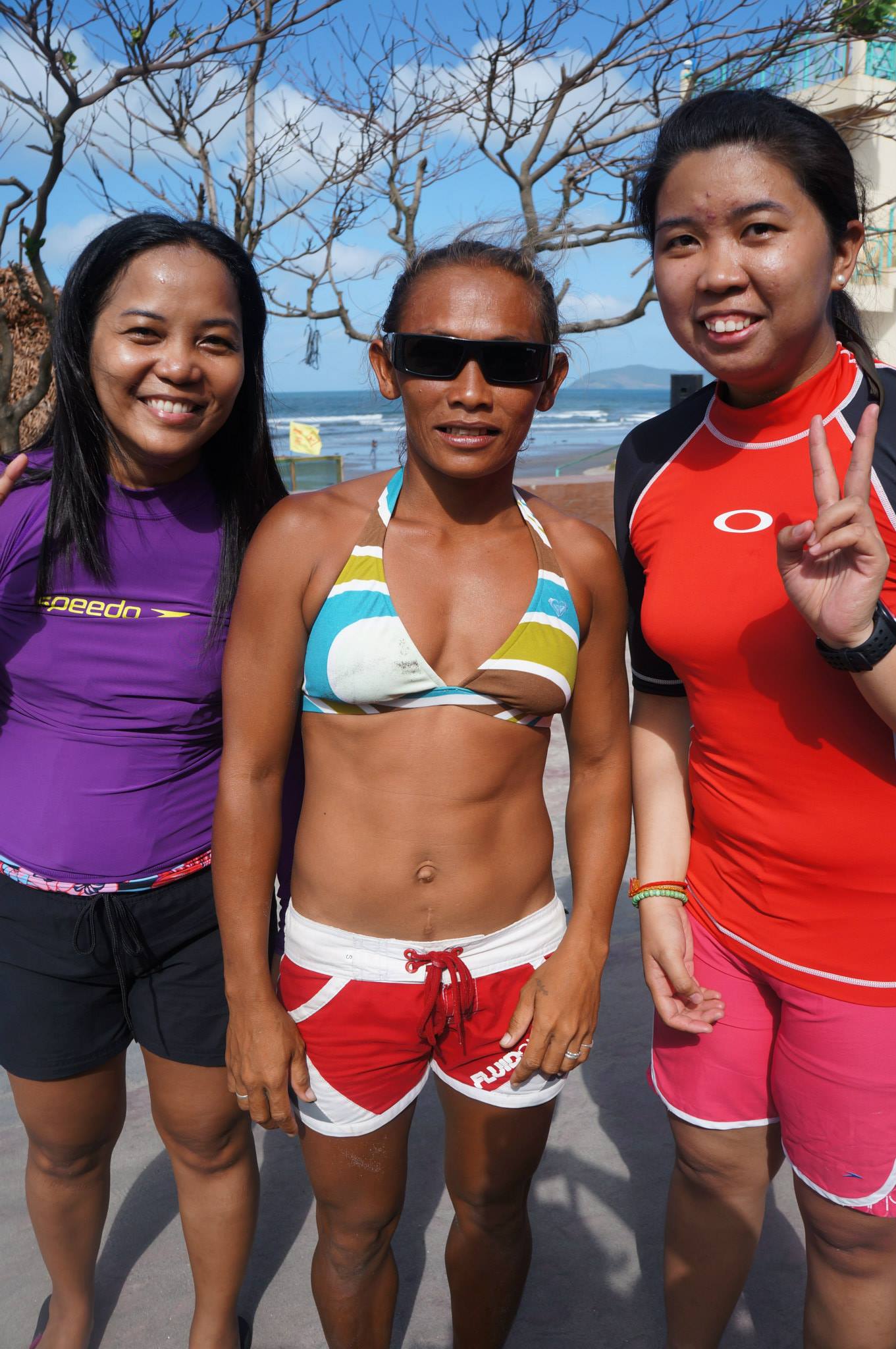 After a very relaxing time at Calaguas, our group headed back to the mainland and we’re off to Bagasbas. Bagasbas Beach is only 4km away from Vinzons Port and should not take you more than a half hour drive.

Dozens of commercial establishments line the street facing the beach, which is a long stretch of gray sand. Gray, you say? Well, one doesn’t come to Bagasbas for the sand…one comes for the waves! And the sight of the swell brought a shiver of anticipation in me — can I ride these beauties?

The waves were pretty consistent, in my opinion. The bottom is also fine sand so it is perfect for beginners. No need to worry about getting yourself cut by rocks or corals.

Out on the beach area, there are many tents renting out surfboards and advertising lessons.

Our tour organizer Dhon was kind enough to introduce us to Mocha Vargas, one of the Philippines’ most bemedalled female surfers. I smile every time I remember standing next to her. Starstruck 🙂

She took me and my cousin to the tent owned by Bagasbas Unified Surfers Association (BUSA) to get lessons. Lessons are P400 per hour, which includes one-on-one tuition with an instructor and board rental.

Just like in San Juan, La Union, our group had a short land lesson on board parts and board safety. Our first instructor Jhong Gerson (with an H, of course, and one of the 3 teachers named Jong/Jhong) asked us who has surfed before. I thought it was wise not to raise my hand just in case I make a fool of myself in the water. I can just pretend I was a complete beginner if I am unable to ride in this session.

Just a note about the beginner’s pop up: push up from the board then make sure  your elbows are locked before you start to get on your feet. This will give you the needed leverage to push yourself to standing position.

Anyway, in the last part of the land lesson, we had to pop up from the sand and assume a balanced stance as if we were actually surfing. The point to this was for the instructor to see who among us uses regular stance and who uses goofy. A regular stance is left foot forward when standing on the board. A goofy foot is the opposite, right foot forward. Everyone is a regular stance except for one guy.

In some of the things I read online, one of the common ways for you to know which stance you should use is to ask someone to gently push you from behind. The foot that you will step forward with on instinct is your stance. I never tried this but I think I would be more comfortable with a regular stance.

When I wakeboard, my right foot is always in front because that’s what the instructor said. Not sure how I would do with the reverse. I suppose this merits a wakeboard trip soon to find out 😉

So anyway, once we got the stance down, we each got our own instructor and board — I got dibs on the blue foamy, haha. And also Jhong. I was a bit apprehensive with the regular boards because I could see they didn’t have enough wax on and I might slip. I know, I have so many excuses, but baby steps first.

Again, like in La Union, we didn’t have to paddle out into the water. The instructors had us lie on our stomachs on the boards they pulled by the leashes. Once our boards are facing the beach, we have to prepare ourselves to pop up and balance for as long as we can.

For the first few tries, I kept slipping and jumping into the water. Then Jhong called me out on an earlier fib. He knew it wasn’t my first time to surf, haha. Now that the secret’s out, I don’t have any excuse to not ride. Pressure.

And I did do it! Several times too, brah! I guess the pressure helped, huh? This by far has been the most successful surfing session I had since starting 2 years ago. I rode for approximately 10 times in an hour. My previous record was 6, in La Union.

Once he saw that I was getting more confident on the board, Jhong pulled me farther from the shore so I could ride longer. Man, it was so exhilarating! That feeling of smoothly gliding over the water, my hair being whipped by the wind — that is simply awesome. I wish I could do this everyday.

Such is the feeling of stoke. Some people are strongly drawn to it that their lives now revolve around it. Jhong told me of a few people who used to work in Manila but quit their corporate jobs and went back to Bicol to be full-time surfing instructors in Bagasbas. One of these is a young man named…Jong — who was my cousin’s instructor.

It was my cousin’s first time to surf and she was so nervous about it. During the session, I kept glancing over to see how she is doing. At one point, I shouted to Jong to take care of her so she won’t die because I don’t know how to answer to my aunt if she did.

I could see that she kept ramming her board against other surfers, when she wasn’t going under. But she also had a couple of instances where she actually stood up on the board. She didn’t get to ride long but props to her for really trying and not letting her fear get in the way.

Seeing her brought me back to my very first surfing experience…I was left with bruises on my body and scars on my self esteem. But it was all happy pain. Pain that I would gladly endure over and over again just to be riding on top of the waves.

I know I will find myself in Bagasbas again. I can only imagine how much more awesome it is to surf during the rainy season.

I was actually surprised that there were big waves here at this time of the year. Normally, during summer, La Union and Zambales are really flat. But I found out later that Bagasbas has waves all year round. Score another one for Bicol!

I already invited my friend Desiree to a weekend in Bagasbas. She is a much better surfer than I am and I am positive she will love it.

Where to stay in Bagasbas Beach

Our group was there only for half a day so we didn’t rent rooms. But our base was Bagasbas Surfer’s Dine-Inn, a cheery place that serves my favourite Bicol express. It looks like a very popular choice for accommodation and food, judging by the crowds inside and out. 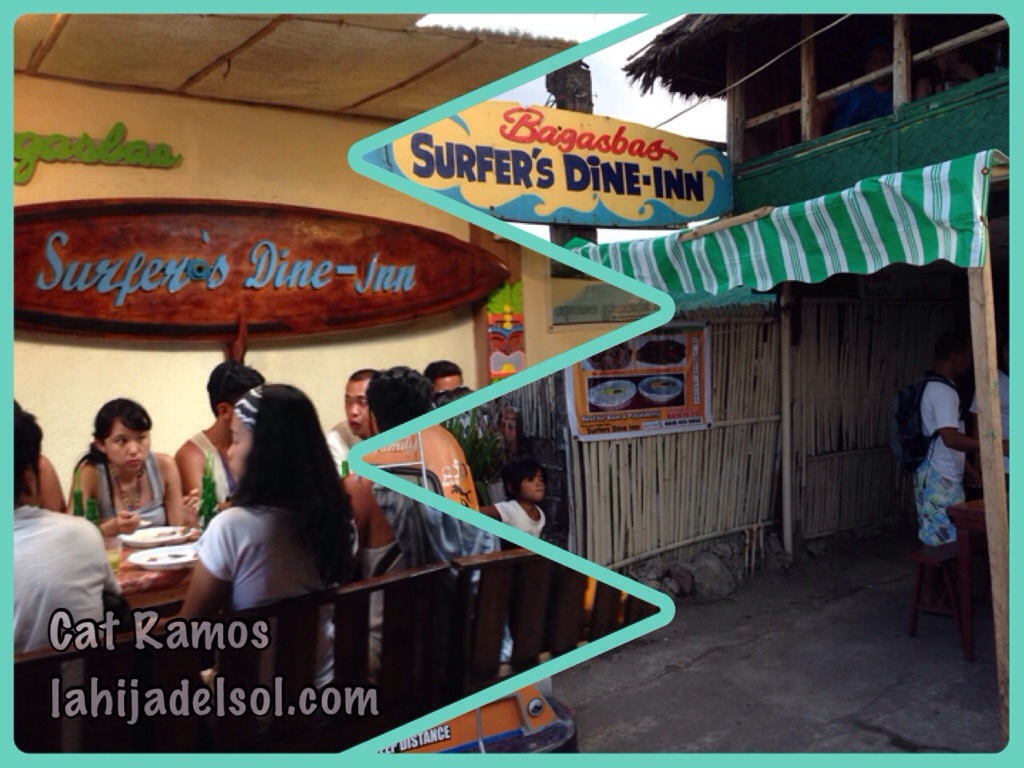 This is what I had for lunch, by the way. And rice and Coke. Because a fiery dish goes so well with ice cold Coke.

I love it so much that I bought 2 frozen orders to bring back to Manila. For myself, of course. I will buy something else as pasalubong for everybody. The Bicol express is ALL MINE.

My cousin also bought frozen laing and Bicol express. Each order is P100. Not so bad, considering that I managed to pack 3 separate bentos with each order.

There are a dozen other options for accommodation and food along the street, just in case Surfer’s Dine-Inn is fully booked. A promising one is White Waves — they sell great halo-halo at P55 (and it doesn’t come with weird stuff like marshmallows and candy sprinkles).

What to get for pasalubong

Head on to Daet market and get a variety of things for pasalubong. First, for the usual stuff like keychains and magnets, do not be afraid to haggle, especially if you are getting a lot. Buy something that looks uniquely Bicol, like those shaped like a chili pepper.

For foodie friends, bring Bicol express and laing only if they like spicy food. You can also get sweets with pili nuts (another Bicol specialty) like pili nut brittle, their take on Baguio’s famous peanut brittle. Another great option is the popular toasted siopao from 3N Bakery, also in the market area. Each is P10 while the normal steamed siopao sells for P8.

Bicol, Bicol, you have seriously captured my heart again. You have great sights, great food and even greater people. I cannot wait to see more of you soon. I look forward to the day when I can unabashedly call myself an “honorary Bicolana”.

PS: I have a confession to make: I don’t like pili nuts. But please don’t take that against my campaign to be an honorary Bicolana. I love Bicol express now and that’s got to count for something, right? 🙂 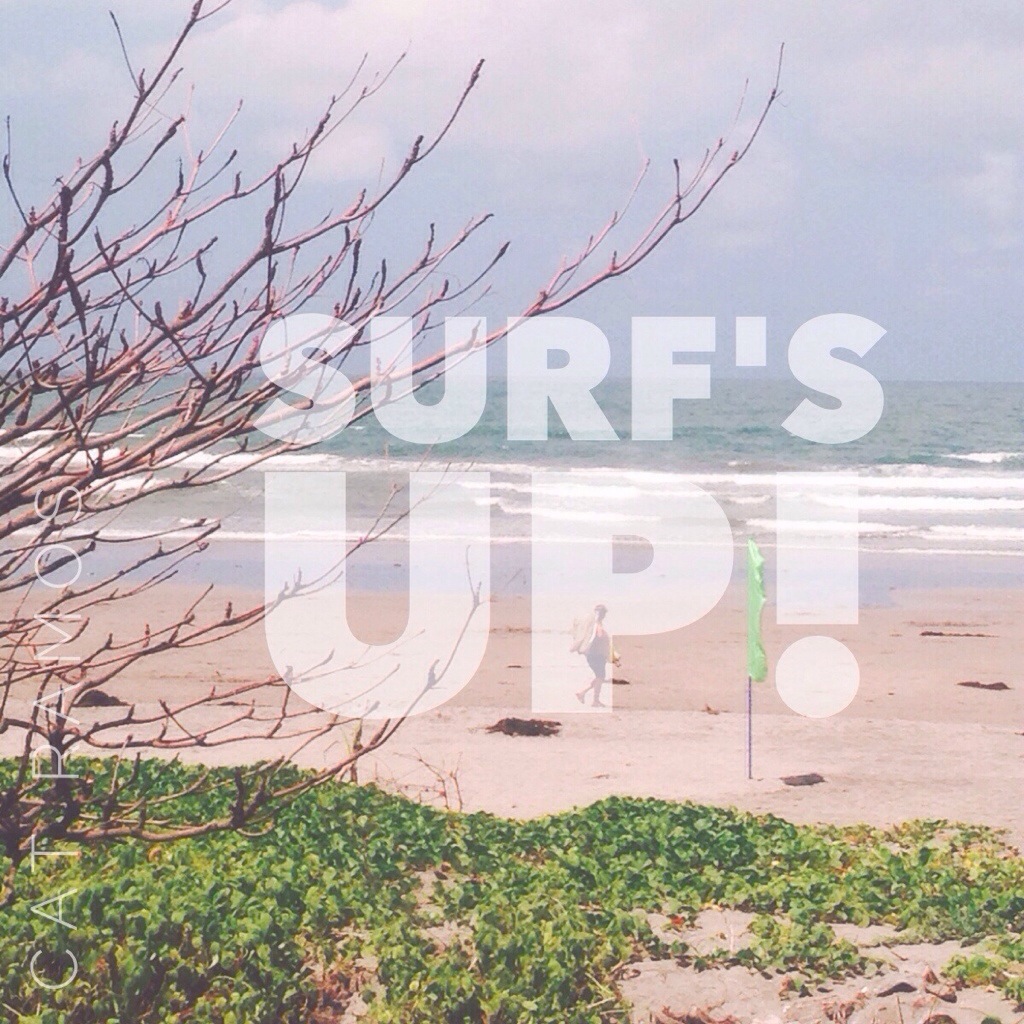 2 thoughts on “Finding the stoke in Bagasbas Beach”