Ta-daaa! Look who made it through week 2. And only one black item. Whew. I am getting used to a routine and it’s not so bad. In general, I tend to keep Japanese in the morning and Hungarian in the afternoon. In the evening, I try to brush up on items by “watering” things on Memrise. My italki schedule for Hungarian will change because Zita has a new office job and can only teach during evenings her time, which is very, very early here. We both agreed on 6am here (11pm Budapest). I cannot wake up any earlier, obviously.

A huge chunk of my time goes into Sou Matome. Every Sunday, I painstakingly type the next week’s words — for all 6 days on Memrise. This is a private deck, btw 😛 Each day, I have to learn at least 20 words and review older items. I try to get a couple of Memrise sessions done as soon as I wake up. I space out the remaining words throughout the day.

I am really enjoying using Japanesepod101 and News in Slow Japanese. Except for the odd Rurouni Kenshin movie, I haven’t really been exposed to a lot of Japanese in the past year. No J-dramas or movies, and only a little bit of music. I thought I was tired of it all and I binge-watched US TV series instead. But the prodigal daughter is back and is ready to rock it again!

Well, my score for the 2nd week of Sou Matome was even worse — 56/100 so that’s not exactly rocking it! Whatever.

Just this week, I listened to a podcast by John Fotheringham. He interviewed Luca Lampariello, one of my polyglot idols and my biggest crush in the polyglot world (#2 is Alex Rawlings, ok?). Luca said he plans to study Hungarian soon. Alex is studying it too, and one of his italki teachers is Zita 😉 I am in great company, eh?

Anyway, I am still struggling with vocabs due to very few cognates with the English language. But apart from that, it has gotten easier for me. Some of the patterns are becoming more intuitive to me and I don’t have to struggle to remember them. I still have a long way to go, though. I haven’t even gotten to the past tense but I’ve touched the “I” form during my sessions with Robert. He insists that I use it as early as possible, even if I can only talk about the first person singular. Well and good. This is what italki will do for you 🙂 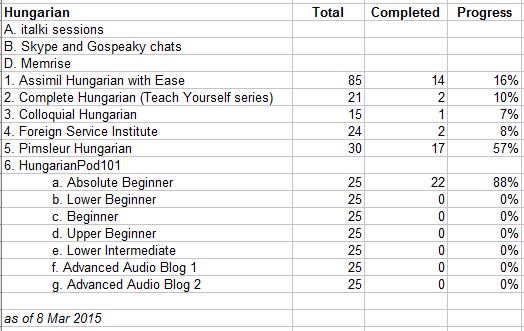 As I said, maintaining my study schedule has gotten easier, even if work is extremely busier now. Proper time management. No Facebook — once I quit it, I gained back so much time for studying. No TV — except for 2 days for The Voice. I try to do some chores while watching so I don’t waste so much time, as each episode is two hours long so technically, I waste 4 hours on TV every week. At least 4 hours. I still haven’t counted the random Blacklist or Big Bang Theory when I am too tired to do anything except watch TV.

Sometimes, when I am really efficient, I find that I have very few items left to study before bedtime. Like today. I can make some headstart for tomorrow’s Sou Matome or maybe listen to another Hungarian pod….but right now, I am listening to “Will I Ever Survive”. The title is totally irrelevant to my language learning journey, of course. 😉